Use of this site means you accept its terms and conditions.
A PROPOSAL by the Sharsmith Peak Committee
TO FORMALLY NAME SHARSMITH PEAK

Purpose of website and background of proposal: This website has as its purpose to further establish the name Sharsmith Peak for a summit on the crest of the Sierra Nevada of California, at the joint border of Yosemite National Park and Inyo National Forest. This summit lies some 5 miles north of Tioga Pass. The peak is named for the late Dr. Carl Sharsmith (1903-1994), photo on left, long-time ranger-naturalist of 64 seasons at Yosemite National Park. The peak name recalls the substantial contributions Dr. Sharsmith made to visitor and public outdoor education of the natural world as well as to his principal science of botany, changing the outlook and even the life course of many who had the chance to be with him. 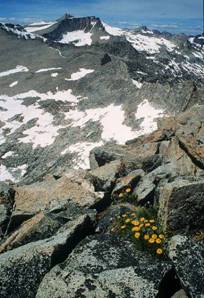 The Sharsmith Peak name is now in informal use. Formally naming Sharsmith Peak for Dr. Sharsmith and the causes he stood for will promote similar dedication in present and future citizens. By so promoting awareness of our Earth habitat, citizens can make effective decisions concerning their planet, a vital step to help assure the future well-being of all people. The naming thus supports the current environmental priorities expressed by the American people as well as by citizens and leaders of other nations.

Formal establishment of the Sharsmith Peak name is proposed to be done via legislation in the U. S. Congress. (A proposal in 2006-7 to establish the name through an administrative process failed in 2011.) A step in the legislative process is to secure sponsorship of a bill by a U.S. congressperson(s),  passage by both houses of Congress, and signing by the president. The formal naming of Sharsmith Peak is supported by many persons who have and have had leadership roles as legislators, national park managers, writers, naturalists, and wilderness advocates, as well as individual park visitors.

Carl Sharsmith on Dana Plateau, mid-1980s--
when Carl was circa 80 years old with still 14 years of service to go
--by Jim Sano

Some more photos of Sharsmith Peak and its region of the Yosemite High Sierra , courtesty Taylor Stanton: 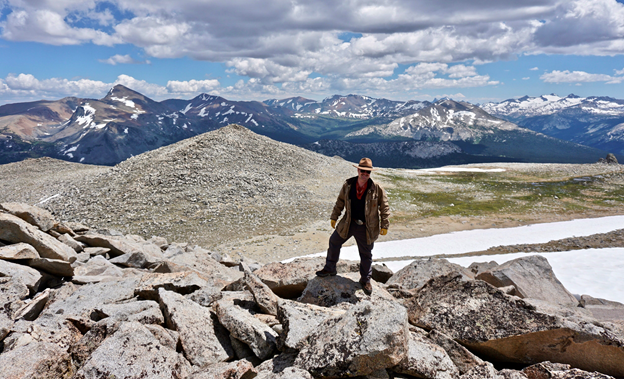