Home & Synopsis/Status Reports    Purpose & Method  Who was Carl Sharsmith?   Why name a Yosemite feature for Carl?/Origin of Proposal   Which feature should be named for Carl?   HOW CAN A FEATURE BE NAMED FOR CARL? Summary of Supporting Statements   Contacts/Resources  Webmaster  Search Form

Use of this site means you accept its terms and conditions. 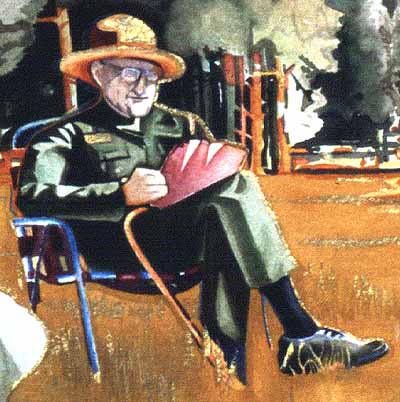 HOW CAN A FEATURE BE NAMED FOR CARL?

Hear Carl extol Yosemite   (if requested for a password, just click on cancel, then if you have Real Player the clip will start in a moment--soundclip courtesy Tom Bopp at www.yosemitemusic.com)

The Naming Process and Policies of the U.S. Board on geographic names

Names in the United States that are printed on federal maps are determined--under Public Law 242--by the Domestic Names Committee of the U.S. Board on Geographic Names, an agency within the U.S. Geological Survey of the Department of the Interior, and composed of at least one representative from each of the Departments of State, War, Navy, Post Office, Interior, Agriculture, and Commerce, and from the Government Printing Office, and the Library of Congress. The Board maintains a website at http://geonames.usgs.gov/pppdgn.html: exits this name4carl site where their policies, procedures, and practices are stated, summarized below:.

The Board accepts and reviews proposals for names:

Renaming features is not encouraged by the Board "except in rare cases such as those involving certain derogatory names and name duplications."

Procedures for submitting a name for an unnamed feature follow:

Insights into the naming process

Review of naming decisions helps give perspective to how the Board applies its policies. Examples are below:

Italic-type text is quoted directly from the Board on Geographic Names web page [http://geonames.usgs.gov/pppdgn.html]. Indented plain text explains how the name4carl proposal meets board requirements

Policy (re: name changes);  sec. 2: Conforming to Local Usage:  It is the policy of the Board to follow present-day local usage whenever possible. However, the Board will consider proposals to change official names that do not agree with well-established local usage or its applications. Considerations other than local usage may be overriding in certain individual cases. Factors such as Board policies, document usage, population density, and State, tribal, and local governmental needs are always considered in Board decisions.

Sharsmith Peak is the name used by Yosemite Association hiking guide Julie Miller to identify the peak herein proposed to be named. This name appeared in print in the Association's announcement of their 2002 Great Outdoor Adventures program, as "Julie Miller will guide her group to the summits of Tuolumne Peak, Tenaya Peak, and Sharsmith Peak." Beth Pratt of the Yosemite Association in 2003 noted that Sharsmith Peak is the name used by park insiders for this feature. And the authors O'Neill noted in 2002 in their hiking guide to this region that there was an interest in naming the peak for Sharsmith. Other names have been used for this peak (False White and False White Mountain Peak), but those using them favor the name Sharsmith Peak. The peak has also been known as Peak 12,002 for a reference to its summit printed on an earlier USGS map. Go to "Which feature should be named for Carl?" for more information on these past usages.

Policy (re: commemorative names); sec. 1: The U.S. Board on Geographic Names will consider proposals for assignment of the names or nicknames of deceased persons to geographic features in the United States and areas under the jurisdiction of the United States. The Board will not consider names that commemorate or may be construed to commemorate living persons. In addition, a person must be deceased at least 5 years before a commemorative proposal will be considered.

Carl Sharsmith passed away 1994, thus in 2006 a proposal to formally assign his name to informally-named Sharsmith Peak meets this 5-year criterion.

Policy (re: commemorative names); sec. 2: The person being honored by the naming should have had either some direct and long-term association with the feature or have made a significant contribution to the area or State in which it is located...Past decisions by the Board have found "direct association" or "significant contribution" when the person being commemorated was a...person who played a large part in protecting the land for public benefit.

For a half century Carl had intimate and continued presence in the High Sierra of Yosemite.  He led short, all-day, and seven-day interpretive hikes for more than six decades in the upper Tuolumne River basin.  He was a renowned wilderness and national park philosopher, scientist, teacher, and inspiration to the thousands of visitors who accompanied him on these high Sierra hikes.  Carl mentored Yosemite’s Chief Park Interpreters, teaching them his charismatic educational skills to those who themselves were also teachers (broadly widening his web of educational influence).  Sharsmith was the greatest interpreter of the wild and scientific values of the High Sierra since John Muir. Virtually every person who attended one of Carl’s seven-day high sierra hikes became a lifelong defender of the Sierra’s pristine values.

By happenstance Carl’s tenure in Yosemite corresponded with the park’s continual quest to understand and manage meadow encroachment by forests, fuel buildup during times of maximum fire control, visitor overuse reducing the wilderness experience, air pollution dimming the vibrant visibility of the Sierra viewscapes, and over-development of visitor facilities.  His was the constant voice rationally interpreting these concerns. With his intimate knowledge of the Sierra he had, and used, a special knack to have visitors at the very most special place, in the best light, and the best circumstance to discover themselves either the highest beauty, the obvious ecological lesson, or the most singular landscape.  Carl was an artist who let you be the discoverer.

Policy (re: commemorative names); sec. 4: All commemorative name proposals must meet the same basic criteria required of any other name proposal...A proposal to commemorate an individual should contain evidence of local support for the proposed name and its application. Such evidence may be in the form of letters from local residents and administrative agency personnel and (or) petitions containing original signatures of local citizens.

Policy: In States with no official State names authority, approval must be obtained from local governing bodies such as the county commissioners or supervisors or the town selectmen.

Policy  (re: in wilderness); sec. 1: Within wilderness areas, the U.S. Board on Geographic Names will not approve proposed names for unnamed features, names in local use but not published, or unpublished administrative names used by administering agencies, unless an overriding need exists, such as for purposes of safety, education, or area administration.

The summit of informally-named Sharsmith Peak is not within a wilderness area, for it lies at the edge. Formally naming this feature Sharsmith Peak will enhance education relating to natural history (ecology) and wilderness values in that the public will continue to be aware of the philosophy and appreciation of the wild qualities of the Sierra Nevada that Dr. Sharsmith so effectively championed and continues to symbolize. A safety concern also arises in that the point in question bears four informal names among its user communities: Peak 12,002, Sharsmith Peak, False White, and False White Mountain Peak, leading to potential confusion and thus hazard among hikers and skiers seeking directions, as well as park and forest and county sheriff management in referring to this point, critical during potential search and rescue operations in the area. At least one such situation occurred in January 1982 when an airplane crashed into a ridge on the peak, killing the pilot and his wife, but not 10-year old son Donnie Priest, who was rescued 5 days later when the snow that had temporarily buried the plane blew off. Donnie's legs had frozen and had to be amputated, however. Daniel Anderson, a ski mountaineer, favors using the name Sharsmith Peak rather than False White (see his statement). The group summitpost.org reports on its website "White Mountain is frequently confused with "False White Mountain", which lies just to its southeast."

Policy  (re: in wilderness); sec. 2: Name proposals commemorating persons are discouraged and will not be considered unless the criteria in Section 1 and the Commemorative Names Policy are met.

The criteria mentioned have been addressed in the foregoing.

Policy (re: long names); sec. 1: The full name of a person as the specific part of a geographic name normally is not approved.

The form of the name Sharsmith Peak meets the Board's preference.

"Geographic Naming in Wilderness. In order to maintain the untrammeled character of wilderness, the naming of additional geographic features is discouraged. The National Park Service will not propose to the U.S. Board of Geographic Names, nor support proposals by others, to apply new names to geographic features within any category of wilderness. An exception to this policy may be considered on a case-by-case basis when a proposed name: (a) serves a useful educational or interpretive purpose; or (b) is linked to an historical figure, activity, incident, or resources having a direct association with the geographic feature; and (c) meets all other National Park Service and Board on Geographic Names policies applicable to geographic naming."

The policy applies to features "within...wilderness". "Within" means "inside". Sharsmith Peak is not "within" or "inside" wilderness, but at its edge.

Even if it is semantically construed that because the western flank of Sharsmith Peak is "within" Yosemite wilderness, the eastern flank is not "within" wilderness. Too, naming the peak Sharsmith Peak qualifies as an exception to the policy as provided, for naming the peak will a) serve as a future reminder of the value of education and interpretation in understanding not only Yosemite and the Sierra Nevada but the ecology of planet earth, and b) recognize the important historical figure Dr. Carl Sharsmith whose name is already in use for the feature, and c) meet all other naming policies as shown in the analysis at the start of this section.

Home & Synopsis/Status Reports    Purpose & Method  Who was Carl Sharsmith?   Why name a Yosemite feature for Carl?/Origin of Proposal   Which feature should be named for Carl?      HOW CAN A  FEATURE BE NAMED FOR CARL?  Summary of Supporting Statements   Contacts/Resources Webmaster  Search Form